Southlake Carroll got big production from the top of their lineup and got a pitching gem from one of the hottest pitchers in the state to beat Ft. Bend Ridge Point 6-1 and advance to the championship of the 6A State Tournament on Saturday. Carroll will face the winner of the Rockwall-Heath/San Antonio Reagan matchup later tonight.

Southlake Carroll picked up a run right off the bat in the top of the 1st. Owen Proksch led off with a single and scored on Ethan Mendoza’s double. Mendoza was later thrown out trying to score from 3rd on a ground ball.

Carroll picked up a 2nd run in the 2nd inning. With one out, Tyler White singled. Tanner Sumer came in to run for him and moved to 2nd on a Tyson Drake HBP and to 3rd on a Proksch walk. He then scored the second run of the game on a wild pitch.

The Dragons picked up 2 more runs in the 3rd. Ben Tryon led off the inning with a single and Reyes reached base by catcher’s interference. Jones walked to load the bases. Springs got on by an error and pinch runner Colin Robson scored. Cole Bedwell then hit a Sac Fly to make it a 4-0 game.

Carroll picked up another run in the 4th when Mendoza double and scored on an error and one in the 6th on a Mendoza RBI single to take a 6-0 lead. 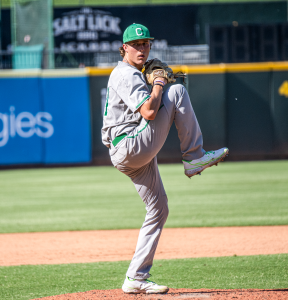 Meanwhile, Griffin Herring was pitching lights out. Herring held Ridge Point hitless through 4 innings until Travis Vlasek singled to lead of the 5th. Herring did hold them scoreless through 6 but gave up one run in 7th on back to back doubles by Vlasek and JJ Kennett to start the inning. That run broke a 47 inning consecutive scoreless streak by Herring that went back to late April. But Herring responded but getting the next 3 batters out. Herring finished giving up 1 run on 5 hits, striking out 13 and giving up no walks. He was named the Texas High School Baseball Player of the Game.