In 1989, Jon Peters became the national record holder for the most consecutive wins (53) by a high school pitcher, a record that still stands today. He finished his high school career with a record of 54-1 and 3 consecutive Class 4A State Baseball Championships at Brenham High School. 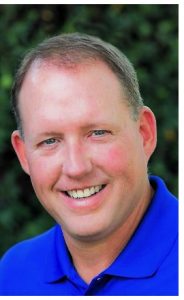 and months of rehabilitation, he gave up his dream of pitching and became an undergraduated assistant coach at A&M. Today he is a business development manager with an oil and gas firm in the Houston area.

Jon’s accomplishments in baseball lands among the greatest in Texas High School Baseball history. In 1989, he had it all. But after shoulder surgeries sidelined his dreams of becoming a professional baseball player, Jon struggled to find value and happiness. After years searching vainly to make sense of it all, alcohol, a suicide attempt, deep-seated anger and a failed marriage made him feel even more desparate.

Jon’s new book When Life Grabs You by the Baseballs is the story of his journey to finally finding the secrets to a happy life. His message is universal: no matter what dreams you’ve lost or what demons you’re battling, you too can find hope, redemption, and joy. The book will available worldwide on Tuesday, March 27th. You can pre-order the book at amazon.com.

THSB was able to visit with Jon by phone and ask him some questions about his story and about his upcoming book. This is part 1 of that interview:

1.  You had an incredible high school career with a national record 53 consecutive wins that included being on the cover of Sports Illustrated and appearing on several national media outlets?  What was life like for you during that time?

It was a great experience to go through what I did and it was an honor to be on the cover of Sports Illustrated. I would not trade it for anything. I was blessed with great coaches and great teammates.

From an early age, I had insecurities of not fitting in and not being good enough. Why I felt that way, I don’t know. I had a very loving family and great friends. But for some reason, it felt as though I was born with a “hole in my soul.”

As I went through the winning streak, my first thought prior to any game was, “Is this going to be the game I lose?” I always projected negative thinking towards myself. However, I was always positive regarding other people’s future. Self-limiting beliefs controlled my mind. However, I never shared any of that with anyone. I thought I had to be tough and fight through the hard times by myself. I thought it was a sign of weakness to ask for help.

I was a good kid with a good heart but I was a kid who would do foolish things. Most of the foolish behaviors were because I was seeking attention. In addition, I was seeking discipline. It seemed that I could do anything and never would I get into trouble or be punished. I attributed the lack of discipline to who I was and the national attention that was on Brenham.

With all the national attention, I was very cognizant of my behavior when the media was around. I was scared that if they really knew who I was, they would smear my name in the papers and on televisions. I had watched them do that with guys in the pros and I did not want to go through that at all. So, I portrayed this All-American guy image like most people thought I really was.

As the media attention increased, the more I got tired of it. It was like they had placed me on a pedestal and I couldn’t do anything wrong. I just wanted to be a normal high school kid. I wanted everyone to leave me alone. I wanted the record to be over and let life get back to normal, whatever normal was. And all of these feelings of mine, no one knew because I never shared it with anyone. I thought I could do it all alone, plus I was fearful of what people would say about me.

The night before the record-breaking game, I got into an argument with my girlfriend and broke up with her. I left her house and while I was driving home, I wanted to die. I was emotionally dead, spiritually dead, and wanted to be physically dead. I grabbed an entire bottle of Tylenol and a large glass of water when I got home. I went to my room and sat against my bed. I took the bottle of pills and laid down for the last time. I was done. I could envision the newspaper headlines reading: Pitching Phenom Dead – Suspected Overdose. But I didn’t care because I was going to be gone. I was tired of being the guy everyone thought was so good and nice. I just wanted to be me and do whatever kids my age did.

The next morning, I woke to the ringing of my alarm. I had failed at even killing myself. I thought, “I am such a loser. I can’t even kill myself.” I got up, got dressed, and went to school. I was more of a wreck that day than the night before. When I got to the park, there were people everywhere. I pulled my hat down and put my head down so no one would recognize me. I didn’t want to talk with anyone. As soon as stepped on the field, it was like I was in my happy place and once I threw the first pitch, it was game on. And after the game I thought, “Finally. I have the record and now all these people can go home. Please leave me alone!”

Why I had no self-esteem? I have no clue. I was trying to do life on my own and I bottled everything up inside of me. And I couldn’t figure out who “my God” was. I tried to put other people’s God in my box and it wasn’t working. The only thing that was working was baseball. So, I put everything I had into the game.

2. When did you know the dream of becoming a Major League Pitcher was over?  How did that affect you?

I had torn my ulnar collateral ligament in 1991 and was scheduled for Tommy John surgery with Dr. James Andrews in Alabama. The night before surgery, my mother and I were in our hotel room watching television. I was depressed that I was about to undergo my third surgery and kept thinking, “No one is going to want to draft me after having three surgeries.”

I wanted to be alone so I walked down to the lobby and sat in a love seat away from people. Memories of the past were running through my mind. Specific games, specific pitches, specific coaches and specific ballparks. Tears began to run down my face, and I could not stop them. They flowed and flowed. I felt like a loser. I felt like the whole town of Brenham was expecting me to be a pro ball player. I felt like I was letting them down as well as my parents, my friends, my coaches…everyone. I cried and cried and said to myself, “It’s all over. There is no way. I will try one more time but I believe this is it.”

After throwing a pity party by myself for thirty minutes or so, I had made my mind up that I would try to come back but I would be okay if this was it. It was at that time that I came to grips that my baseball playing days might be over. And I began to be okay with it. As it would turn out, I came back but then tore my rotator cuff and called it quits as far as my playing days.

Tomorrow:  Part 2 of the Interview with Jon Peters

Link to Pre-Order When Life Grabs You By the Baseballs 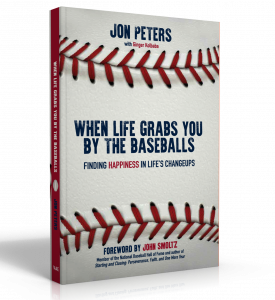