Diamond Pro 6A 1st Half Pitcher of the Year
Nathan Dettmer – San Antonio Johnson, Sr
2-0, 18 IP, 0 H, 0 R, 7 BB, 36 K, 0.00 ERA
Dettmer has earned wins in two of his three outings behind two complete game no-hitters. His first game was a no-decision as he carried a 0-0 contest against Tomball through six innings. 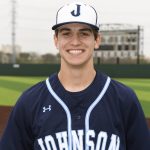