In one of the toughest and grittiest games of this year’s state tournament, Georgetown scored early, played good defense and got a gutsy pitching performance from Jacob Hadden to hold off Friendswood 2-1 and capture the 2022 5A State Championship. This was Georgetown’s first baseball state championship after chances in the state tournament in 2015 and 2019. 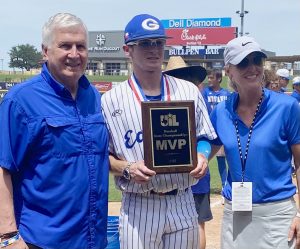 Hadden had a great outing, giving up one unearned run on just 4 hits, striking out 4 batters while walking only 2. “My change up was working and that made my fastball better and I was able to keep them off balance a lot of the time,” Hadden explained. “I just filled it up and let the defense work behind me and they did a great job.”  Hadden was chosen the Championship Game MVP by the media.

Friendswood got on the board with an unearned run in the top of the 3rd. With one out, Kyle Lockhart got on base by error and was awarded 2B as well. 2 batters later Reed South singled to score Lockhart. That made it 2-1 for Georgetown.  The Eagles held on to that lead for the rest of the game to claim the 2022 5A State Title.

“This is the most amazing feeling to play your last high school baseball game by winning the state championship,” 3B Logan Smith stated. “Everybody just loves each other and plays unselfishly. It was a big win and a big year for us.” Smith was 1-2 with the Home Run in the second inning and a hard hit out in the 4th.