Throwing a no-hitter is a big deal. Hitting for the cycle is a great feat. For a player to do both is extraordinary. Doing both in the same game is unheard of.

But that is exactly what Frisco Lone Star’s Sr SS/RHP Ryan Bogusz did last Friday evening in a playoff game versus Dallas Woodrow Wilson.

At the plate, Bogusz hit a single in the 1st, a double in the 3rd, a triple in the 4th and an inside-the-park home run in the 6th to complete the “natural” cycle in 4 at-bats. On the mound, he threw a complete game no-hitter with 16 strikeouts, allowing one base runner–a walk to lead of the 3rd.  Bogusz struck out the side in 4 of the 7 innings.

“In 30 years of coaching, I’ve never seen anything like this,” explained Lone Star Head Baseball Coach Joey Franke. “I’ve had some no-hitters and I’ve had one or two hit for the cycle but doing both in the same game is just crazy.” 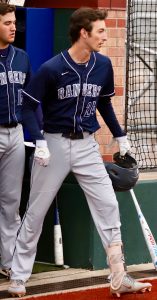 Bogusz was aware that he was a Home Run short of the cycle when he came to bat in the 6th but didn’t really think it was possible. “The field at Allen High School has deep fences so I didn’t think about hitting one out, “ Bogusz commented. “I just wanted to hit the ball hard and put it in play.”

Bogusz did hit the ball hard to deep right center field. It hit the bottom of the wall and careened back towards the infield.

“He hit second base and put it in gear,” Franke told. “I don’t think you could stop him from going home”

Bogusz agreed. “I glanced back on the way to third and saw they were still chasing it. I had already wondered if I could have made it home on the last triple so I just decided I was going to go for it on this one.”

Bogusz slid home safely without a tag, completing the “natural” hitters cycle of a single, double, triple and home run in order in one game. He ended the game 4-4 with a run scored and 4 RBIs.

With adrenalin flowing from the inside-the-park home run and a 7-0 lead, Bogusz went after the Woodrow Wilson batters. He struck out all six batters in the 6th and 7th innings, preserving the no-hitter and ending his incredible day with a stamp of dominance.

Bogusz has played well all year long, especially on the mound. He is 11-0 this year with a 0.72 ERA and 117 Ks. He was named the Runner Up Diamond Pro 5A Pitcher of the Week two weeks ago and now has thrown back-to-back no-hitters including one against Denison in the Bi-District playoffs.

At the plate, Bogusz has been productive but nothing like last Friday evening. Coming into the series with Woodrow Wilson,

“Ryan is just a competitor,” added Franke. “He challenges every batter when he is pitching and we know he will put the ball in play for us when he is hitting. He is a quiet leader who leads by example.”

As for Bogusz, it’s still hard to fathom what he accomplished. “Sometimes I just think, ‘Did I really do that?’ ” He said he has enjoyed hearing congratulations from a number of people, including the coaches from Oklahoma St. where Bogusz will be playing next year.

But for now, it’s back to business at hand with the Regional Quarterfinal Series coming up with Lovejoy. “I know I can’t top what I did last week,” Bogusz explained. “My goal is not to beat my performance from last week but to do what I can to help us win this week.”

And his coaches and his teammates know that’s exactly what they will get from the competitor who has been consistent all season long.