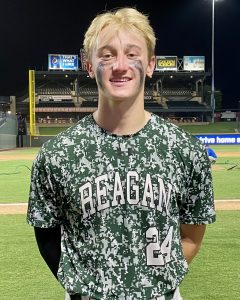 Reagan pitcher Aidan Coleman shutout the 6A defending champion Heath Hawks pitching 7 innings, giving up only 5 hits while striking out 5 and only giving up 1 BB. “My slider was working really well for me tonight,” Coleman explained. “and when I can throw that pitch well and shuffle in the fast ball it really helps me battle against the batters”. Coleman was named the Texas High School Baseball Player of the Game.

Reagan started the scoring off in the 2nd inning. Cole Tabor led off the inning with a single and stole 2nd. With one out Luke Sasser singled home Tabor to give Reagan a 1-0 lead.

Reagan extended their lead in the top half of the 3rd with some help from Heath. Ashton Beaird and Britton Moore drew back to back walks. Two consecutive balks scored Beaird and moved Moore to 3B. A Teagan Peeples single up the middle drove in Moore to give Reagan a 3-0 lead.

The Rattlers picked up three more runs in the top of the 7th. After a Moore walk, Peeples sacrificed Moore to second but the throw to first was wide allowing Moore to get to 3rd and Peeples to 2nd. The next batter Greer hit a fly ball to right field and Moore tagged from 3rd to score. Tabor then hit a disputed ball down the 1st base line for a double, scoring Peeples. Several walks later brought in Tabor to score the 6th and final run of the night for Heath.

Tabor was 2-3 with a double, a rbi and two runs scored.