Francisco “Paco” Hernandez is a 6’5” 210 RHP/OF for the 6A Laredo Alexander Bulldogs. He has committed to Oklahoma State University.

As a freshman, Hernandez was 6-2 with a 2.86 ERA and 28 Ks. He was named to the 29-6A All-District Team as a First Team Pitcher. He was also named the Freshman of the Year on the Laredo Morning Times All-City Baseball Awards. 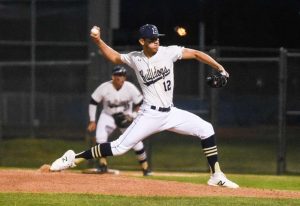