The Southlake Carroll Dragons continued their dominance in 6A Texas High School Baseball winning their 3rd State Championship in the last 4 seasons and their 5th overall. Carroll beat San Antonio Reagan 8-5 in a hard fought contest that saw the Dragons gets 13 hits.

Carroll had to bounce back today from a place they haven’t been since late April – behind. Giving up only 2 runs in 9 playoffs games, the Dragons found themselves down 3-0 early in the contest.

After a scoreless 1st inning, Reagan scratched out 3 runs in the top of the 2nd. Andrew Ermis walked and Luke Sasser laid down a nice bunt down the 1st base line for a bunt single. The next batter Jacob King laid down another nice bunt towards 3rd and Carroll pitcher Owen Proksch scooped it over with his glove and tossed to the third baseman. The ball went over his head and Courtesy Runner CJ Hall scored on the error. Two batters later, Ashton Beaird bunted towards 3B and was thrown out. But Sasser scored from 3rd on the bunt for the second Reagan run. Then Britton Moore came up and singled in King to complete the Reagan scoring.

Down 3-0, Southlake Carroll responded with a run of their own in the bottom of the 2nd. Clark Springs singled to start the inning and courtesy runner Nolan Harsy went to 3rd on a wild pitch and ground out and then scored on a throwing error by the Reagan SS to cut the lead to 3-1.

In the bottom of the 3rd, Mendoza and Tryon were walked and then were sacrificed over. Mendoza scored on a Nick Jones ground out and Tryon scored on a Clark Springs single and Southlake Carroll tied the game at 3 runs each.

Carroll continued their offensive attack in their 4th frame. With runners on 2nd and 3rd and 1 out, Proksch came up to bat and hit a hard liner to RF scoring both runners and giving Carroll their first lead of the game. Ben Tryon hit a Sac Fly making it a 6-3 Carroll lead.

Reagan picked up another run in the top of the 6th, when Beaird drew a bases loaded walk, making it a 6-4 game. But relief pitcher Tyler White got the next batter to fly out, ending the threat.

Carroll extended their lead in the bottom of the 6th on a Reyes RBI and a Springs RBI, giving Carroll a 8-4 lead going into the last frame.

Reagan was able to get one more run in the 7th when Brennan Greer tripled and Andrew Ermis singled to score him. But White struck out Luke Sasser on the next at bat to end the game and give Carroll the 2002 6A State Championship. 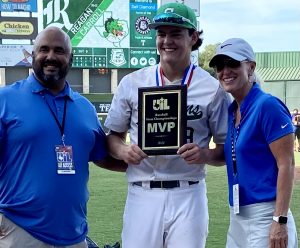 Owen Proksch pitched 5.2 innings, gave up 4 runs, 3 earned, on 4 hits with 9 strikeouts and 3 walks. He was also 2-4 with 2 RBIs. He was named the Championship Game MVP as selected by the media. “I thought the 3 runs were on me,” Proksch commented. “So I felt good about the rest of the game because they hadn’t barreled up any pitches against me and I felt like I could get the outs I needed, especially with the defense.” At one point, after the 2nd inning Proksch shut down 8 straight batters and struck out 5 of those batters. And then he got the go ahead RBIS in the 3rd.

“We’ve been working so hard for this,” an emotional Ethan Mendoz added. “It’s what we talked about and dreamed about and now it’s hard to believe it really happened.” Mendoza was 2-3, with a double, a rbi and 2 runs scored. He also made some big plays at SS.