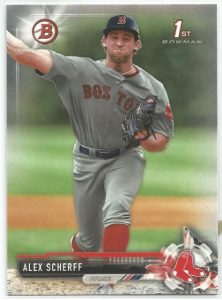 Alex Scherff was a RHP for the Colleyville Heritage Panthers 2017. He played for Prestonwood Christian Academy in 2016. In his senior season, Scherff was 15-0 with an 0.73 ERA and 144 Strikeouts in 85.1 innings. He was named the 8-5A Pitcher MVP and a 5A All-State 1st Team Pitcher. He was selected as the Texas Gatorade Player of the Year.

In his junior season at Prestonwood Christian Academy, Scherff was 11-0 with a 1.03 ERA and 82 Ks. He was the winning pitcher in Prestonwood’s TAPPS 5A State Championship Game. He was a combined 26-0 in his junior and senior years.

In the summer of 2016, Scherff was selected to play in the Under Armour All-America Game and the Perfect Game All-American Classic.