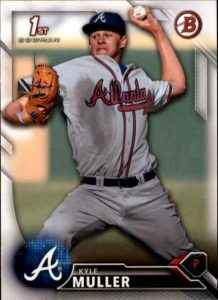 Muller signed a National Letter of Intent with the University of Texas. He was drafted by the Atlanta Braves in the 2nd round of the 2016 MLB Draft. On June 14, 2016, he signed with the Braves, receiving a $2.5 signing bonus.

Muller has played in the Braves organization the last 4 years. He spent 2019 with the AA Mississippi Braves and was a Southern League Mid-Season All-Star before a calf strain ended his season prematurely. In 4 years, Muller has a career Minor League record of 20-10 in 67 starts with a 3.03 ERA and a 336 Ks in 326.2 innings.