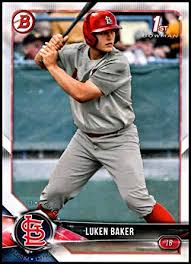 The summer of 2014 was a big summer for Baker. He won the Junior Home Run Derby at the MLB All-Star festivities. One month later, he won the Under Armour All-America Games Home Run Derby.

Baker signed a National Letter of Intent with Texas Christian University. He was drafted in the 37th Round by the Houston Astros but did not sign. He would have been selected in the earlier rounds but sent a letter to all MLB teams before the draft announcing his intention to enroll at TCU.

As a sophomore, Baker hit .317 with 8 Doubles, 8 Home Runs and 41 RBIs. An injury cut his season short but he still was named to the All-Big 12 Conference 1st Team. In his junior season, Baker hit .319 with 9 Home Runs and 26 RBIs. Again, an injury cut his season short and he was only able to play in 31 games. In his 3 year career at TCU, Baker averaged a home run every 18 at bats.