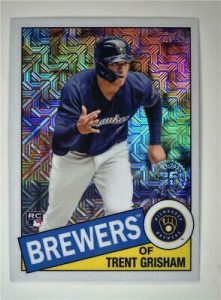 Trent Grisham was a Center Fielder for the Richland Rebels 2012-2015. His first legal name was Trenton Marcus Clark. He later changed his last name in 2017 to Grisham, which was his mother’s last name.

In the Fall of 2014, Grisham was selected to the 18U USA National Team. The team won the gold medal and Grisham was the top overall hitter with a .538 batting average and broke a new Team USA record with 24 RBIs.

In his junior season, Grisham batted .463 with 10 Home Runs and 42 RBIS. He was named a 4-5A 1st Team All-District Outfielder and a 1st Team All-State Outfielder.

Grisham signed a National Letter of Intent with Texas Tech University in 2014. He was drafted with the 15th pick of the 1st Round by the Milwaukee Brewers in the 2015 MLB Draft. He signed with the Brewers with a $2.7 million signing bonus.

On August 1, 2019, Grisham was called up by the Milwaukee Brewers. He finished the season with the Brewers batting .231 with 6 home runs, 24 RBIs and 24 Runs. On November 27, 2019, Grisham was involved in a multi-player trade that sent him to the San Diego Padres.