Daylan Pena is a 6’2” 218 1B for the 29-5A Corpus Christi Veterans Memorial Eagles. He has committed to Texas State University.

As a freshman, Pena hit .458 with 13 Doubles, 2 Triples, 7 Home Runs, 52 RBIs, 32 Runs, 7 Stolen Bases, a .526 OBP and a .748 SLB PCT. Pena was named a 1st Team All-District 1B on the 30-5A All-District Team and the Newcomer of the Year on the All-South Texas Baseball Team. He was also named to the 5A All-State Tournament Team going 2-3 with a double in the State Tournament Semifinal Game. He was selected as a 2nd Team 1B on the Texas High School Baseball Coaches Association 5A All-State Team and a 2nd team 1B on Texas Sport Writers Association 5A All-State Team. 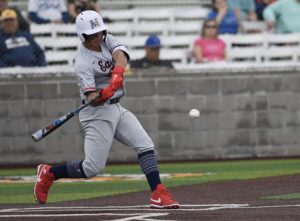