To The Road and Back by Mike Gustafson

Gustafson has been visible in baseball circles the past decade as president and CEO of the College Baseball Foundation and as radio and television analyst for Texas Tech baseball broadcasts.

But before he played for Tech and before he was overseeing the annual selection and induction program for the National College Baseball Hall of Fame, his passion for the game was fueled by his time playing for Bobby Moegle at Monterey.
Now Gustafson has put together a book on his coach, a 273-page collection of insights and anecdotes as told by 30 men who played for, coached with or covered Moegle. 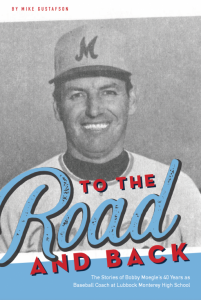 “To the Road and Back: The Stories of Bobby Moegle’s 40 Years as Baseball Coach at Lubbock Monterey High School” came to fruition 15 years after Gustafson first conceived the idea. He put in the hard work over about the past four years.
“So to get a copy in my hand and to have a copy to sell and to see the smile on coach’s face and hear coach (Gary) Ashby and people like that talking about having read a few chapters and being excited about what they read, it’s just a good feeling all the way around,” Gustafson said.

Moegle, who grew up in the Austin-area town of Taylor, turns 87 on June 30. It’s been a little more than 60 years since he moved to Lubbock.

Despite three successful years in the St. Louis Cardinals’ farm system in which he averaged 17 home runs and 90 runs batted in, Moegle thought his opportunities to move up were limited, so he retired at age 26 to start coaching.

What sparked Gustafson’s interest in writing a book on Moegle was a conversation with Heisman Trophy winner John David Crow about Bear Bryant, Crow’s coach at Texas A&M. Gustafson thought Bryant and Moegle, highly successful coaches and stern disciplinarians, had traits in common.

And Gustafson had plenty of source material. He was a two-time all-city and all-district middle infielder on Monterey state-semifinal teams in 1984 and 1985 and, as a longtime Lubbock resident, he knew generations of other Plainsmen players.
Gustafson first thought of doing one chapter apiece with material from each of the contributors, but didn’t much like that idea. The format came to him as he transcribed hours of interviews.

“Those themes, those chapters, sort of revealed themselves to me as I went along,” he said. “Everybody’s stories fell into what I think are about nine chapters. I think they really fell into about nine categories.

“Once I had pieced the ideas together and then I tallied up the words, I realized I didn’t have one chapter that was 120 pages and then a bunch of other chapters that were like four pages long. I knew the book had some balance, and it was broken into pieces that were sort of topical.”

In addition to his own interviews, Gustafson drew on Moegle sit-downs with Lubbock ISD-TV and with the Southwest Collection/Special Collections Library at Texas Tech.

Some of the voices in the book come from men who went on from Monterey to have success in college and-or professional baseball, such as Ashby, who made it to Triple-A in the San Diego Padres’ organization, and Jimmy Shankle, who reached Double-A in the Boston Red Sox’s chain.

But being a star wasn’t a requirement.

“The 30 people that contributed to the book aren’t the 30 greatest players of all-time. It’s a mixed list,” Gustafson said. “The main thing I tried to do is get balance across the years.”

The title of the book is a reference to one of Moegle’s disciplinary methods. In practice, when the Plainsmen would have mental lapses or too many misplays in quick succession, Moegle would stop the drill and send his players running “to the road and back.” They’d all drop their gloves and take off.

“I knew a lot of us had done it,” Gustafson said. “When I started putting this book together, I realized that every group from Keller Smith and the guys that were with him to start in the early ’60s to the guys like Jeff Horn and Dusty Buck and the guys that were with him in the late ’90s on his last few teams, we all did it. We all did it to the road and back.
“Everyone ran until the pressure was there in practice to get us going.”

It must have worked, and it must have been timeless. Even near the end of his coaching career, Moegle led the Plainsmen to the state tournament three times in four years from 1994 to 1997.

In all, Moegle’s teams made 13 trips to state with the four titles and four runner-up finishes.

Asked how much of the material he knew beforehand and how much he learned in gathering stories for the book, Gustafson said it was about half and half.

He was amused by one of the tales he had never heard: During the Plainsmen’s state-title run in 1972, Moegle had found and pocketed old copper pennies a couple of times before victories early in the playoffs. Ritualistic as baseball men can be, Moegle then found himself anxiously searching for another good-luck charm as his team took warmed up on an adjacent field before the state-championship game.

“I didn’t even fungo, because I was looking for that penny,” Moegle says in the book. “I’m walking out by 2nd base on the skinned infield part and here’s an old dark penny laying out there to the right of the bag. Somebody put that penny there, or I was very lucky.

“I had found my penny and we went ahead and won the state championship.”

Gustafson self-published the book through IngramSpark with design assistance from Hartsfield Design in Lubbock.  It is available for $25 plus tax and shipping at moeglebook.com.